Once upon a time, Games Workshop decided to make a really cool boxed set for Warhammer 40K. It contained sprues to build 5 Custodian Guards, 5 Sisters of Silence, Contemptor Dreadnought, Land Raider (or "Land's Raider, if you've read Master of Mankind") and a Rhino.

When the box was still available, it retailed at around 100 euros. It had a good value proposition, as just a Custodian Guard Squad and a Land Raider is already more expensive. Well, to be honest, the real value depends on how much you value this variety of plastic crack. For me though, it was so good that I got two boxes! 😆 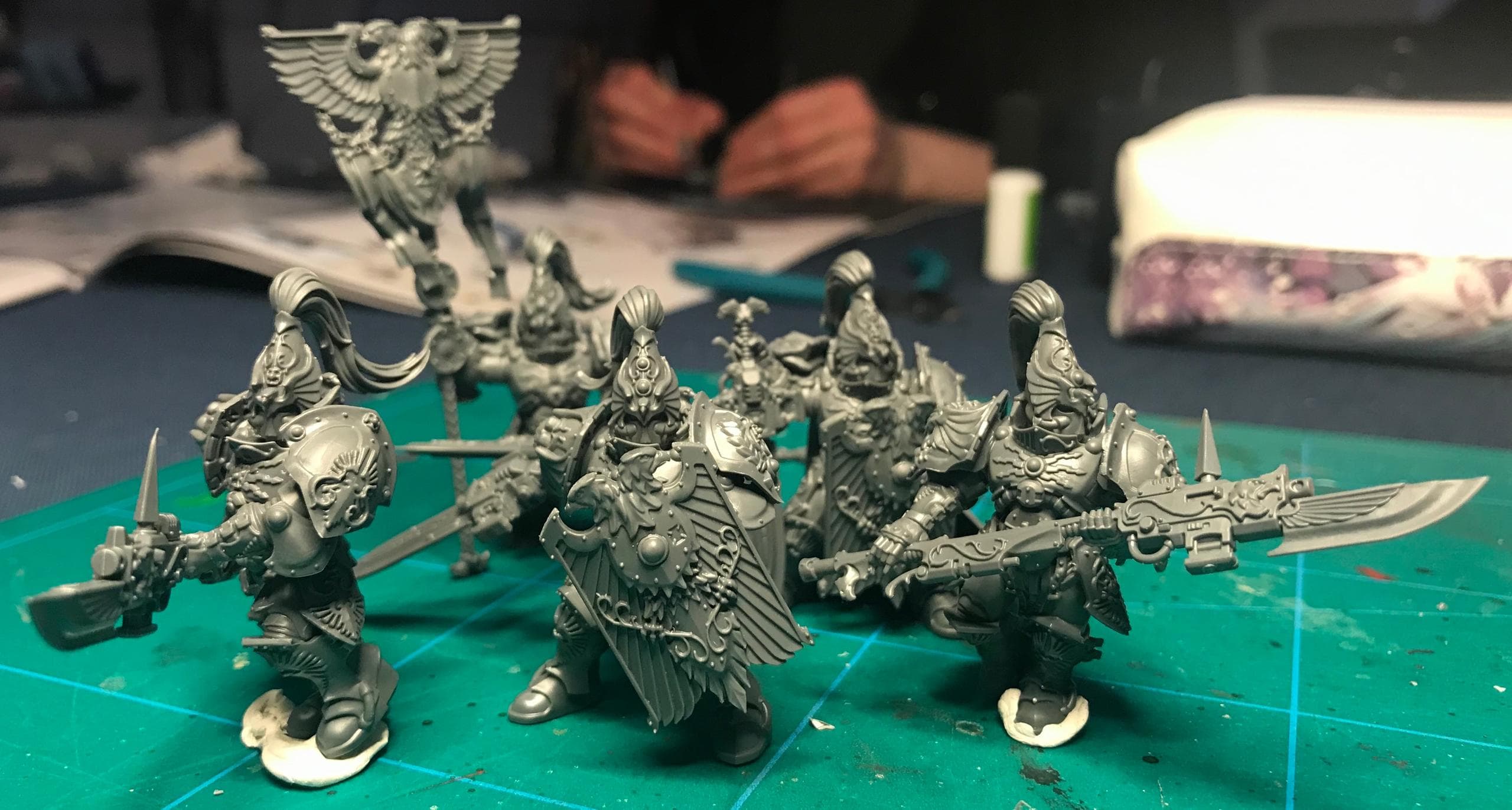 I assembled the first squad pretty much according to the instructions. Two Custodian Guards armed with Guardian Spears and another Guard with Sentinel Blade and Storm Shield.

The rules included with the box set had the Shield Captain as part of the Custodian Guard Squad, similar to Space Marine Sergeants in Tactical Squads. Fortunately, when the Codex Adeptus Custodes was released, Games Workshop changed the Shield Captain and Vexilus Praetor to characters. They also dropped the required number of Custodians in the Guard squad down to three, which helps with list building. More about this later.

I dislike having exactly same poses for my miniatures. For mass armies like Orks it's not such a big problems as the sheer number hides the similar poses. For Custodians though, whose individuality in both fighting style and armour is promoted in the lore.

Because of this, I couldn't follow the instructions anymore with building the second squad. Luckily, this set somehow escaped Games Workshop's current preference in making monopose kits. Uniqueness can be achieved with monopose kits, but it usually requires heavy modifications in form of cutting, sawing an green stuffing. 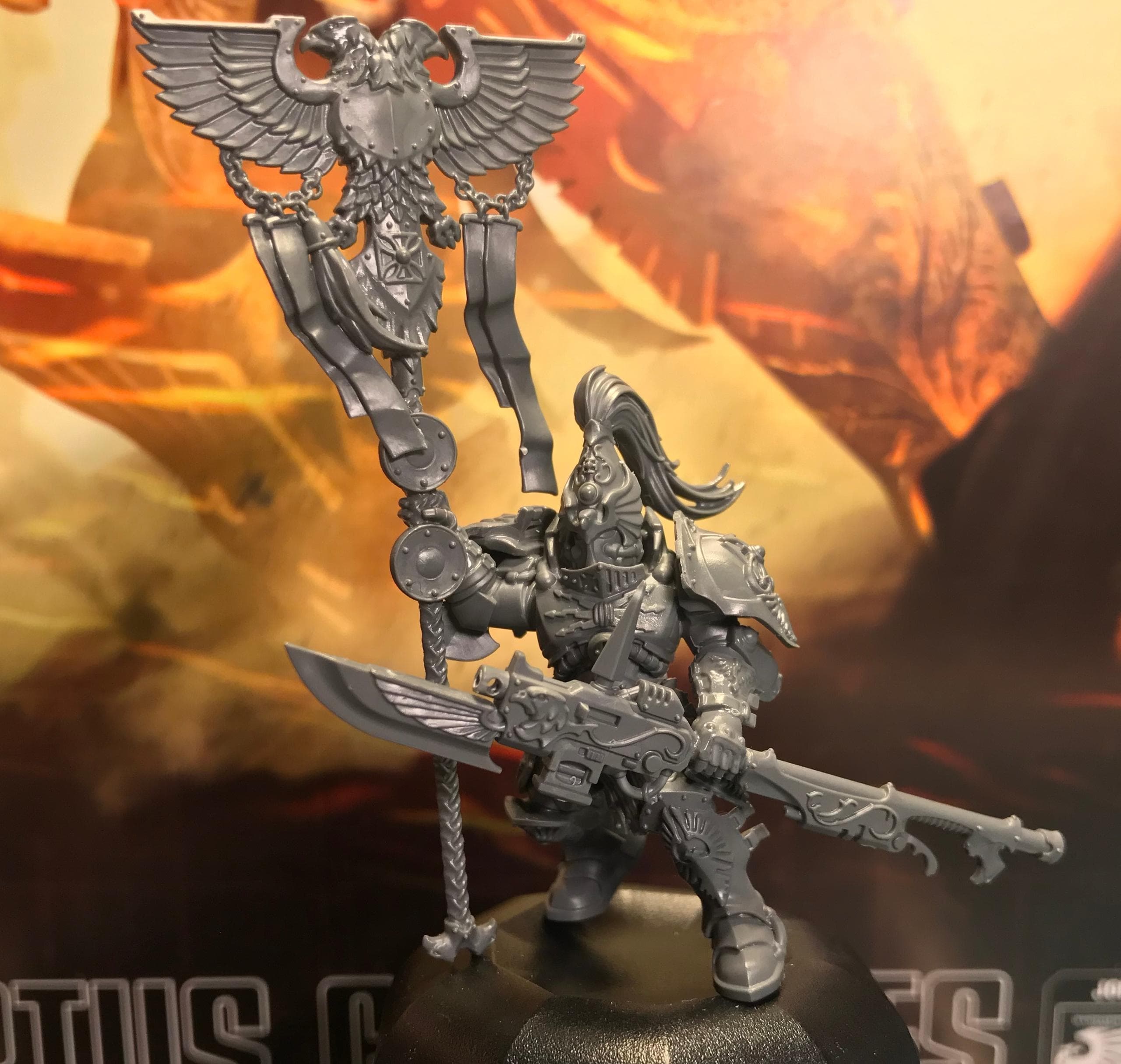 The Vexilus Praetor was the model that underwent the most modifications. The kit doesn't come with a Guardian Spear for left hand. I ended up taking an arm wielding a Sentinel Blade and snipping the blade off near the fist. Then I took a right handed Guardian Spear cut it in three pieces, removing the fist part. I pinned the two parts of the Spear to the first fist by drilling a hole though it and inserting 1mm thick wire for strength.

While not a complex conversion, I'm still feeling quite good about it. 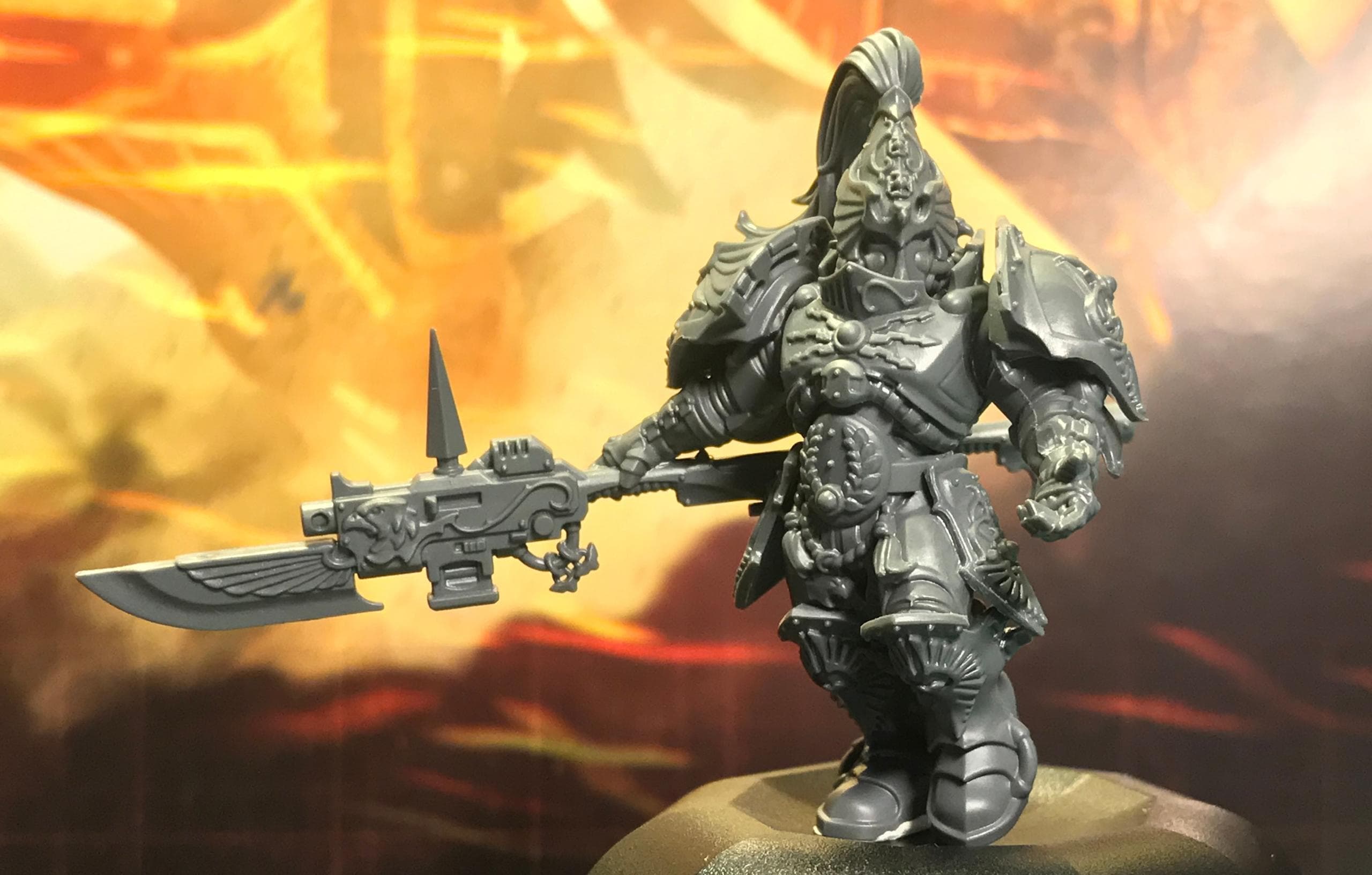 I'm perhaps most pleased with how this pose turned out. Hence he received the honor of being the poster boy of this blog post! Holding the spear behind him with extended open hand forward just radiates either arrogance or one's trust in their own ability. For a Custodian, I think it would be the latter. 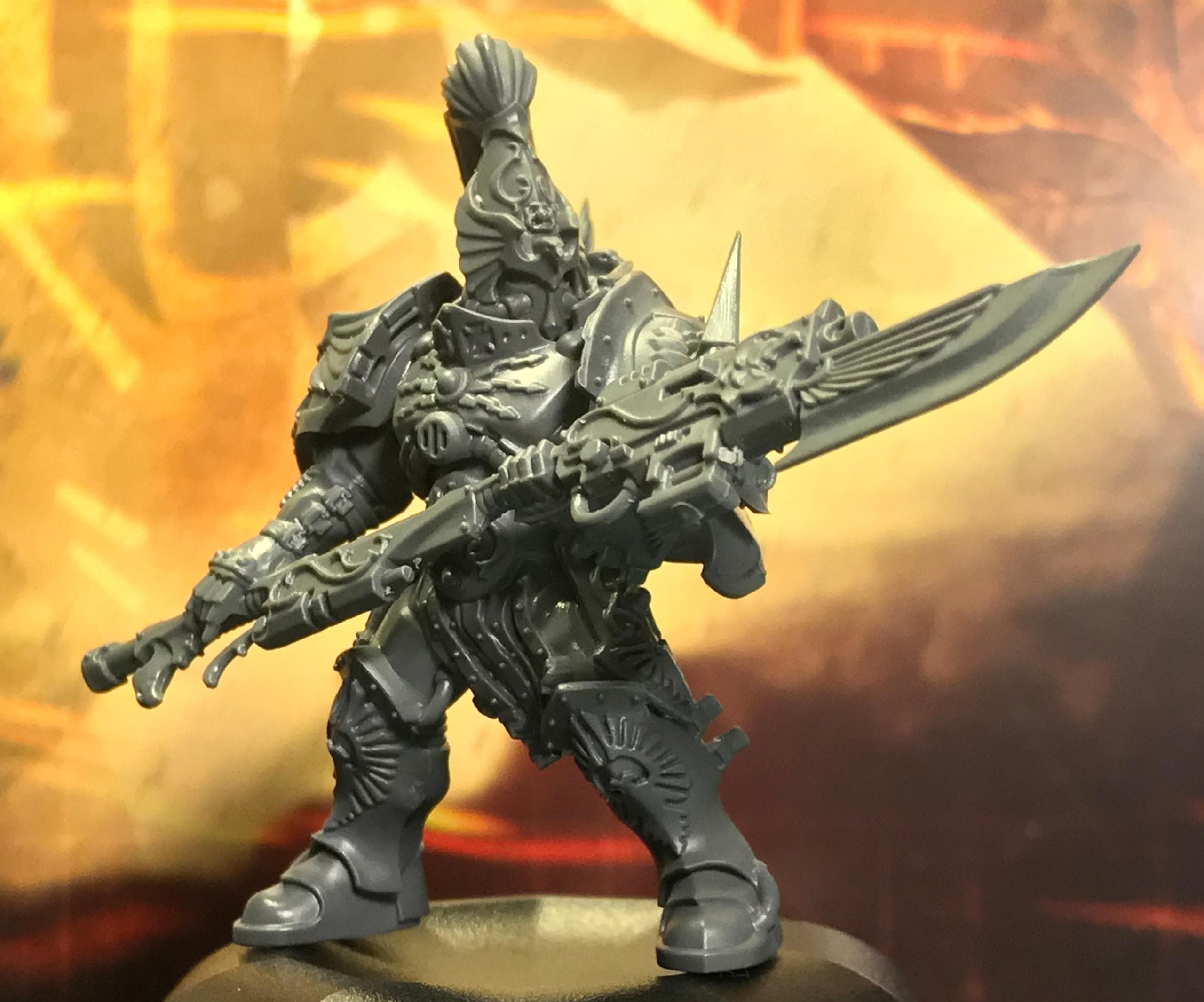 There's only five different sort of legs in each kit which means that some sort of similarity between the squads is bound to happen. I paid close attention to not pair the same side plates with same legs between the squads. Same with the shoulder armors and helmets. So even if the hands are holding the Guardian Spear the same way in both squads, all the other elements should be different. 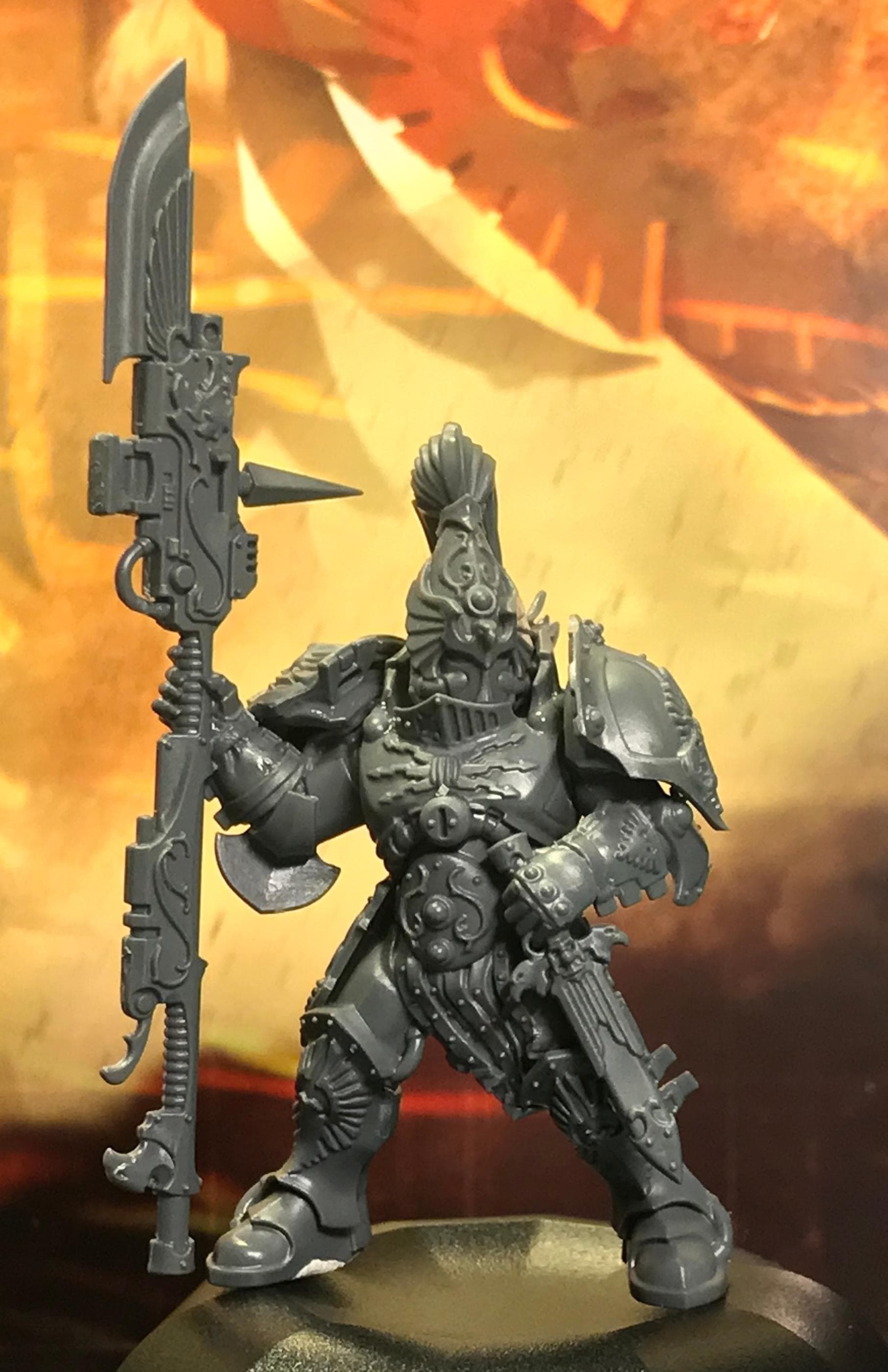 I dislike this pose. It's too static. I really wanted to do something different with the left arm, as I don't think the Misericordia should be sheathed. Going through my bits box, I was unable to find a proper looking stand in for the blade. The Space Marine Power Knifes are not decorated or wide enough. In the end I had to compromise. I also had to pin the hand in place as it kept falling off. Perhaps it wanted to be there as much as I wanted it to be there.

You can also notice that the legs for this model are the same as the previous model. With every other part being different, it hardly stands out. 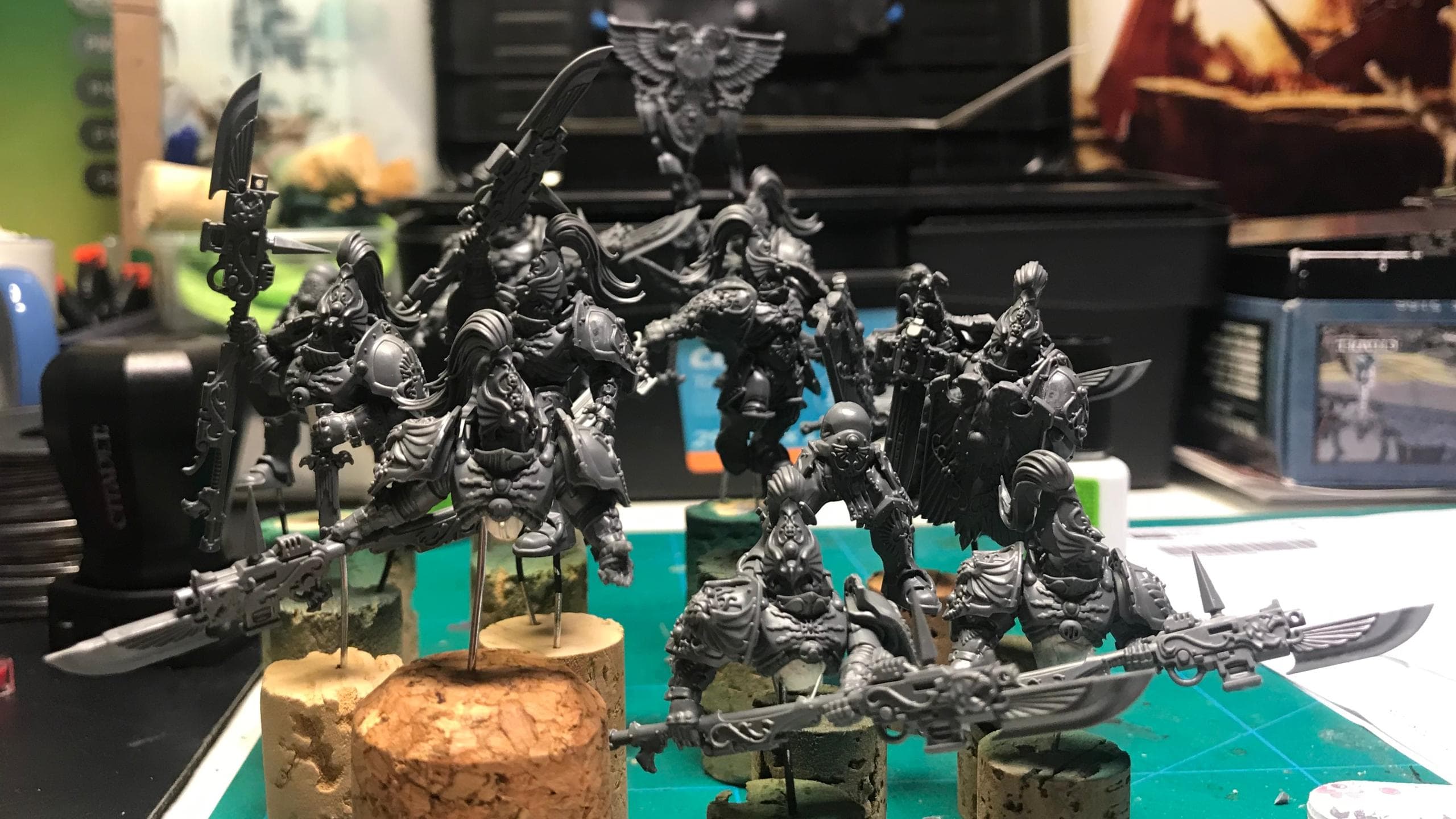 I prefer to paint models in some sub-assemblies. Especially the Storm Shields can block spray and brush from putting the paint where it needs to go. I drilled the barrels and went over all the models once again, removing mold lines where still present.

I washed the models with dish washing soap and rinsed with warm, running water. They are currently drying under a woven bread cover (to prevent dust setting on them).

They'll be drying like this for a few days at least. Patience is the key here, as I've previously ruined some paint jobs with undried water hiding in a crevice but mixing with paint when sprayed.

As I've mentioned earlier, the Codex dropped the required number of Custodes in a Custodian Guard to 3 and split the Shield Captain and Vexilus Praetor to independent Characters. This is really good change, as it makes running a Battalion Detachment of Adeptus Custodes easier.

Battalion Detachment requires at minimum 2 HQs and 3 Troops. Outside of Forge World's offering the Custodian Guard Squad is the only unit with the battlefield role of Troops available. This brings down both the point and the monetary cost of running a Custodes Battalion. You now need to only get two boxes of Custodian Guards as opposed to the three boxes before.

Unfortunately for me, I had already assembled the Vexilus Praetor before thinking about the lists too much. 😆 You need nine Custodes to make three units and I now only have eight. I think my opponents are okay with using the Vexilus Praetor as a proxy for one normal Custodian. He has the Guardian Spear so it shouldn't be too confusing. Just need to disregard the Vexilla's buffs.

As for the HQ selection, I have one Shield Captain, but will need another one to fill the Battalion's requirements. I must say, the Captain-General Trajann Valoris is a mighty good looking model...

More from the category: Work in progress

METAL GEAR... IT CAN'T BE!? Assembiling and painting the Metal Gear Rex model from Kotobukiya.

More with the tag: Unpainted